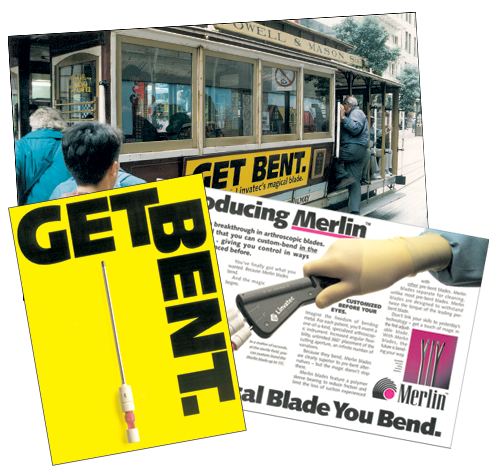 Bristol-Myers Squibb owns a Clearwater-based surgical-tool subsidiary called Linvatec. Shirley/Hutchinson was asked to name, position and launch a (revolutionary) new arthroscopic blade.  For the first time, a surgeon would be able to customize the angle of the blade at the operating table to fit the specific problem he was facing.

The biggest challenge: Linvatec wanted to unveil it at one of the largest medical shows in the country, with 30,000 surgeons and a tremendous amount of competing advertising noise.  Our solution: put the differentiating benefit in hard-to-miss language (Get Bent), then put that message everywhere, including cable cars and bus shelters.

We even signed an original mark developed around the name we chose for the product (Merlin, which referred to its near-magical ability to alter its look and shape depending on the situation).

We consider it a compliment that some of the bus-shelter signs were stolen.