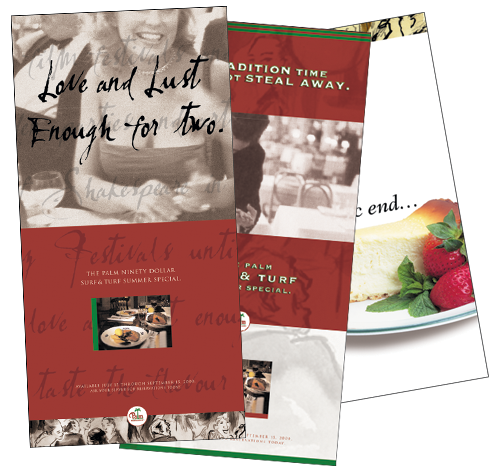 Few, if any, upscale restaurant chains can claim the heritage of The Palm.

After three generations, the guiding minds behind The Palm began expanding the restaurant’s horizons. They carefully opened locations in selected vacation destinations across America: Hilton Head, Las Vegas, East Hampton and Miami, among others.

Curious new customers became dedicated diners, as they sampled Palm classics like the one-and-only, original Surf and Turf.  This massive lobster-and-steak dinner for two is promotionally showcased in the summer.  Shirley/Hutchinson was commissioned to generate traffic and sales by creating an original direct-mail concept.

The reduced-for-a-limited-time price point was $95.

Clearly, this kind of investment marks a memorable evening. So Shirley/Hutchinson opted for a dramatic demonstration that progressively revealed the dinner, one course at a time, culminating in a nearly-life-size three-pound lobster, next to an 18-ounce New York Strip.

The client was hoping for a 3% increase in sales. The mailer delivered almost 13%.