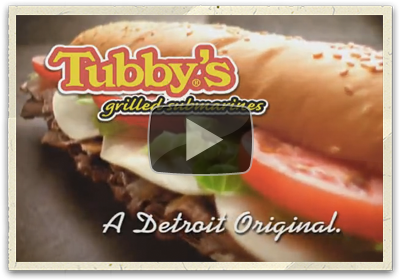 Tubby’s started selling submarine sandwiches in Detroit in the late Sixties. Today, Tubby’s is larger than Blimpie, larger than Quizno’s… larger than any other sub chain (with the sole exception of Subway) in the markets they compete in.

In fact, their Michigan-based presence is similar to most national QSRs. Unfortunately, their marketing budget isn’t, and they’ve lost customers to larger competitors outspending them a hundred times over.

Tubby’s had “underexposed” differentiating benefits: an excellent (and expanding) fresh-grilled product line and a three-decade Detroit legacy.  So Shirley/Hutchinson rebranded them as “A Detroit Original”… using TV, radio and strategic POP components.

The result: sales are up. More stores are opening.